Child prodigy Jacob Barnett told his audience at TEDxTeen conference to forget what they know. In a fifteen(ish) minute presentation he talks about the past year when he had what I would call an awakening. For those who don’t know, Jacob at age 12 had an estimated IQ of 170 – Higher than Einstein – and had advanced so far in his studies at Indiana University that he was offered a PhD research position.


“Forget what you know,” the young man tells his audience as he describes his journey from Special Ed classes to teaching himself advanced and applied mathematics in a few weeks. He did this to give himself the tools to adequately prove his own theory regarding relativity - one which no-one else had previously thought of. He explains that during his Special Ed classes – where he received no education other than an introduction to finger-painting – he decided to stop learning and start thinking. He was not damning Special Ed, in fact his testimony as to how his Autism makes him view the world helps explain in part how he was misunderstood and misdiagnosed. He describes how he is often lost in thought; for example watching a shadow and wondering where it is reflected from captivates him for hours – but to the rest of the world he looks like he isn’t thinking at all.

During Special Education classes at his junior school he explains that he stopped learning. After he stopped learning he began to think; he imagined things no-one else had considered and by doing so taught himself to describe his thoughts, leading him to study, to think some more and, eventually, create – equations, formulae, theories, calculations. Things that I have barely any understanding of at all. Watching Jacob’s mixture of self-conscious confidence, social awkwardness and engaging (though sometimes painful) wit I am reminded of the children I have taught with Autistic Spectrum Disorder. But what is most compelling about him is his apparent genius.

I worked with a genius once, a savant. I was a mainstream Art teacher, many years ago, he was in Year 9. I first realised his creative potential when taking a cover lesson in my ‘free’ time. His reputation for violence and disrespect of teachers preceded him, but what did not were his keen artistic skills. After the class was over I flipped through the work books to mark them and found on the cover of this young man’s book a very detailed caricature of Bob Marley. Later that year, when his name appeared as having opted for GCSE Art I made sure he was in my class.

His drawing skills were incredible, he could draw anything at all in perfect clarity and detail from memory alone. But what I remember most clearly was during his GCSE Art Exam – for which he had done no preparation due to lack of attendance - I gave him paints, a brush and a mirror and asked him to paint a self-portrait on a large sheet of cartridge paper. After an hour he had finished. It was breath-taking, I remember commenting with my Head of Department on the subtlety of his strokes, the complexity of his colour-mixing and the depth created by his use of shadow and light. My Head asked me how long he had been painting, to which I replied honestly that he had never, to my knowledge, painted before.  Sadly he dropped out of school, but I did manage to place him on a foundation course with my old tutor from Art College and I believe he became a tattoo artist.

But I digress. The title of my blog, "Learn. Think. Create." is inspired by Jacob. Although he urges people to reject learning in favour of thinking, I think he is just using a more dramatic emphasis to say the same thing. After all by 'thinking' he is not actually rejecting learning per se, rather he is redefining and remodelling his own learning experience. His experience highlights a growing issue in the education system globally - that learning and thinking have somehow become divorced from one another; that learners are not thinking. Also, it could be argued that the providers of learning are also not thinking - not thinking about how to teach relevantly, responsively. But that is a debate for later.

Perhaps Jacob would agree with me that it is not the act of learning that is at fault but the way in which we learn, in other words, the way we are taught. That learning is not learning if it does not involve thinking. And Jacob's second point is that thinking is fruitless without creation. In his seminar he reiterates the importance of creating something, of making, doing, changing the world. That learning, thinking and creating are an educational trinity which falls apart when any one piece is missing. I believe this is true for any kind of education at any level. When we learn we receive input, when we think we internalise our learning, and when we create we externalise our thinking, more often that not teaching others. 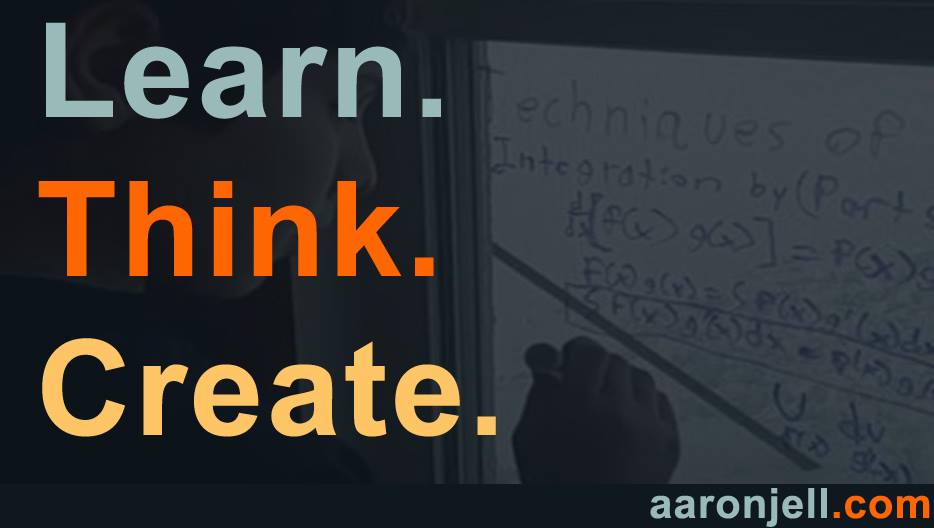